The Inner Sciences is an International Network of independent not-for-profit Organizations and Individuals working together to spread Spiritual and Esoteric Teachings throughout the World. The Teachings of The Inner Sciences can uplift and harmonize a Practitioner’s Life.

TIS is dedicated to providing Complementary Healthcare Information and Energy Treatments, as well as a broad Spectrum of Spiritual Practices that include various forms of Yoga, Meditations and Esoteric Teachings that lead one to Rapid Personal Growth, Self Awareness and Spirituality.

How these Organization Began

The unique 2004 document is the only one of its kind He ever signed during His lifetime. No other of His senior students ever received this kind of personal validation from their Spiritual Teacher - in the form of such clear Personal Belief and Trust. These qualities are inherent in the Creation of these documents. While Ms. Anderson could have continued Teaching under the Authority of the 2004 Document, her life took an unanticipated turn due to organizational events.

Traumatized by Countless Disappointments, Politics, Restrictions, Inadequate Communications and more – virtually hundreds of students and Instructors from all over the World were looking for an Organization, that would  provide them with Positive, Uplifting Energy, a strong sense of Optimism, access to previously unavailable information – as well as new opportunities to advance personally and professionally.

Both Students and Instructors strongly requested Ms. Anderson to provide them with an opportunity to be able to Learn and Teach in New and Creative Ways.

After a number of months of meditation, consultations and careful consideration, Ms. Anderson decided to form a new organization.

She “Cut all Connections” to her past association with the other organizations -  as well as from the course of study that they offer.

This specific Decision and Action was a direct fulfillment of a Promise made to her Guruji on the morning of 19 March 2007 – that in the future, should it become necessary, she would find New and Creative Ways to continue to Spread Spiritual Teachings.

Many consultations and extensive guidance from attorneys from various global areas was taken. The tedious job of creating a new School – with a completely new and separate Curriculum began.

The Institute for Inner Sciences

The first of The Inner Sciences International Network of Organizations, The Institute for Inner Sciences opened in 2010 – as a not-for-profit Association in Europe.

From this special and very intelligent group of people - an International Team of Workers rapidly fell into place. Most labor has been accomplished through an extensive Donation of Time and Services. It should be clearly noted that all of the Amazing Work at The Inner Sciences is the result of this Personal Dedication and Team Work.

After forming TIIS – Ms. Anderson thought that she had completed the job. But very soon Students from other parts of the World began to object to European Regulations being applied to them. They requested a separate Branch of the organization be established outside of the EU.

This request was facilitated – through another not-for-profit organization, The Inner Sciences Foundation (TISF - a US based, tax-exempt 501c3 Organization).

Then to her surprise, in August of 2010, a few Students from Southern India requested to join The Institute for Inner Sciences. During this period Ms. Anderson was working in India, as an Independent Lecturer with AIYVPHFT – and she refused to bring the European Organization to India. She requested these students to try to work out their differences in India.

By February 2011, it became clear that Teaching within the various areas of her choice was not viable in India. When a few productively, rajasic young Students - strongly requested her to Teach in their areas, she agreed to do so.

In March 2011, she opened The Inner Sciences India Trust (80G, 12A Tax Exempt organization) to serve the needs of Students in India.

All of the Organizations of The Inner Sciences International Network were opened with small amounts of money.

All were opened at the request of the local Students.

Each of the TIS Network of Organizations is entirely separate from the other Organizations. Each operates entirely in accordance with the laws of the countries - in which they were established.

The only similarity between these Organizations is that they share the same New Curriculum created by Charlotte Anderson.

It should be noted that the Teaching Materials prepared by Ms. Anderson for The Inner Sciences International Network of Organizations are distinctively different from those of any other organizations.

New materials and workshops for The Inner Sciences Network of Organizations are constantly being produces.

The Spiritual Teacher of The Inner Sciences Network of Organizations 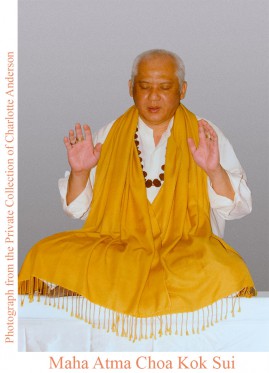 Each of these Organizations share a Deep and Abiding Reverence for the same Spiritual Teacher – Maha Atma Choa Kok Sui.

Without His Constant, Endless and Bountiful Blessings –  of the Establishment of these Organizations would NEVER have been possible.

Within The Inner Sciences network of Organizations our Beloved Guruji Maha Atma Choa Kok Sui and His Lineage – are Constantly Acknowledged.

He holds a place of  the Utmost Devotion within the Hearts of  all of His Students – including those of this New School of The Inner Sciences.